How Walmart Allowances Can Go Wrong

Walmart allowances are used to help Walmart to recover some of the cost of doing business. Most of the allowances can be given Off Invoice (OI). Allowances, for the most part, are found in agreements between suppliers and Walmart.

When allowances are not given correctly off the invoices you will see deductions for Walmart allowances. The deduction codes for allowances are in the 50s and generally involve allowances that are on your Online Supplier Agreement (OSA). These codes are:

The most common reason for getting allowance deductions is not giving the allowances in the correct spot when invoicing Walmart.  Your invoice should mirror the raw EDI data from Walmart. Some suppliers do not select to pull the raw data from Walmart’s EDI transmission, so allowances are given in the wrong area of the invoice.

Another common error occurs when you are supposed to be giving a defective allowance but you transmit the invoice as another allowance type such as a promotional allowance. Again, with this Walmart will take a deduction for the valid deduction code but keep the invalid allowance that was given off invoice.

Walmart’s line-level matching system cannot match an allowance that is given off in the wrong area of the invoice which is why you will see an allowance deduction. This is why it is very important that when your EDI team is receiving the raw data from Walmart, they retrieve all of the segments and transmit all of the required segments.

The first step you will need to do to correct this error is to have your EDI team pull the Walmart raw EDI data and see where the allowances are supposed to be on the invoices.  If they are not showing allowances in the raw data, then they are not pulling that segment from the raw data and will need to change the segments that they are capturing.  This is a common mistake that a lot of suppliers make.  Remember you are supposed to be mirroring the invoice to the raw EDI data.

Getting Repaid for Walmart Allowance Deductions

You will need to create a spreadsheet showing all of the invoices that the invalid Walmart deductions were taken on.  On this list, you will need the invoice number, PO number, allowance code, deduction amount, check date, and check number.  Also, provide a few invoice examples showing that you gave the allowance off the invoices.

The more information that you provide to Walmart upfront when disputing invalid deductions, the better chance of getting it resolved the first time around. If you are seeing deductions for Walmart allowances, then you would need to dispute these in the Walmart disputes portal explaining the error.

SupplyPike offers an easy software solution for disputing invalid deductions. Our Deductions Navigator software will automatically download the necessary documents, such as POs and invoices, showing the valid allowances so you can get your money back. 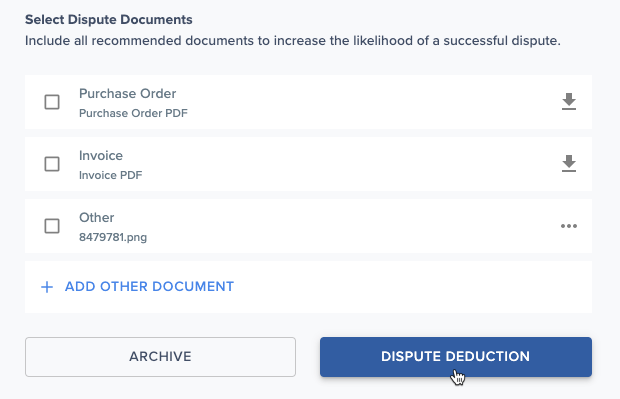 Get started today for free!